The award ceremony for the Italian Long-Distance Gliding Championship (CID) 2017, which concluded on 15 September, was held on Saturday 7 October at Rivanazzano-Voghera Airport during the gala dinner of the annual National Gliding and Aerobatics Meeting. The occasion saw Alessandro Busca, a member of Aero Club Valle D’Aosta, officially crowned and awarded for having achieved the title of Italian Gliding Champion in his category for the third consecutive year.

The competition, in which only pilots of Italian nationality can take part and which takes place from 1 March until 15 September each year throughout the whole of Italy, assesses the three best flights by each pilot entered in the championship for each class. As a reminder, there are three classes based on their handicap: Club (gliders with a handicap of less than 1.07), 15 metres (gliders with a handicap over 1.07) and Open (gliders that do not fall into the first two categories).
How are these flights assessed, and what are the criteria?
Following their flights and within 48 hours of landing, pilots registered for the CID must upload the flight log files to the online platform of the “OLC” Online Contest at www.onlinecontest.org The flight log file is obtained from the data logger on board the glider (IGC certified and tamper-proof), which records the various parameters of the glider’s journey: GPS trail, altitude, speed, duration, etc. Once uploaded to the site, the file is processed by a program that takes into account: the type of glider (class/handicap), the length of the route, the average speed of the flight and the geometry of the route (triangular routes are awarded a higher score as they are more difficult than “simple” round-trip routes). Once this processing has been carried out, the OLC platform assigns a score to the flight: the longer the flight, the higher the score. It goes without saying that, as an Italian Distance Championship whose purpose is to promote and develop distance flying in Italy, the pilot who completes the three longest flights wins.
Unlike in previous years in which he won the CID in the Club class with his 18-metre Ventus-2cxa, this year Alex Busca allowed himself the luxury of dominating the top class (Open), beating pilots of the calibre of Giorgio Galetto from Bolzano (world gliding champion in ’99 with fifteen Italian titles) and Alberto Sironi from Calcinate Varese (holder of numerous European distance and speed records over the Alps).
Busca’s performance this year was superb: the total score for the sum of his three flights was 3,093.11 points against Galetto’s 2,601.19 and Sironi’s 2,561.91. Just to emphasise the point, last year Sironi was crowned Italian champion of the CID 2016 Open class with 2,732.96 points.
In fairness, Galetto and Sironi are rather marginal participants in the competition since they are members of the Italian national gliding team and are therefore often involved in competitions taking place abroad.

During the evening, Alberto Sironi, in his role as a speaker, officially asked Busca to become part of the national team’s group of pilots and thus participate in European and World Gliding Championship races.

Now it’s time for a winter break to recharge our batteries, but our calendars are marked for 1 March 2018, where the start of the CID will see three very strong Aosta Valley pilots returning from a sabbatical year: Giacinto Giorgio, Enrico Berthod and Giancarlo Casella, who will compete in the 15 metre and club classes respectively, along with our very own Alex Busca.
See you next year!!! 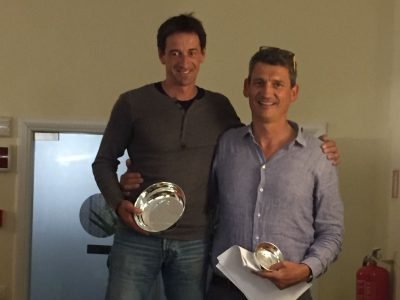